Reflections on a Week with Lakota Youth

It took the most part of a day to get my house back in order. Piles of laundry, sweeping sand off of the floors, restocking the kitchen shelves from something other than Hi-C, Fuego Takis and Cocoa Krispies.

The 2018 Lakota Youth stay week officially ended on Wednesday morning, August 1st with tearful goodbyes in front of Sanctuary UCC on High St. in West Medford, our headquarters for the week.  There were hugs from some and even a “See you in five years!” from a hopeful 13-year-old girl, planning to attend Harvard University. The eleven Lakota youth and their two adult advisors piled intof our hatchbacks and made the trek back to Logan airport, from where they had arrived on Tuesday July 24th, at 11 pm,.

Each of the kids that came to Medford this year was a unique individual. In addition to being Lakota, they are American, and this was reflected in their clothing styles and their cell phones. I absolutely loved getting to know each child and the two adult advisors. Each host family hosted one or two youths for the busy week. The depth and complications of the Youth Stay’s schedule of activities was reflected in my wrinkled and tattered printed itinerary.

Before the week began, I highlighted where we were going each day, what time we needed to meet and whether or not I needed to prepare a brown bag lunch for my guest, 14 year old Preston, from Martin, South Dakota; or in my case, three lunches, as my 13 year old son, Clay and I went along on many of the day trips with the youth. We traveled to the Boston Aquarium via the Rose Kennedy Greenway, drove up to the Peabody Essex Museum in

Salem, rode a ferry to Spectacle Island in the Boston Harbor, toured Harvard University and TD Garden and cheered the Red Sox to an overtime win at Fenway Park, to name a few of our experiences. Of course the itinerary didn’t include getting caught in a rainstorm in Salem, where several of the youth ran outside to play in the rain, mentioning how seldom it rains on the reservation.

In addition to sightseeing, we spent time together as a group, getting to know each other, and sharing our cultures. We had potlucks and circles in parks. One highlight was the Tipi event, held on Sunday, July 29th. The Lakota youth, host families and Medford community, participated in the raising and painting of a spectacular 18’ Sioux tipi in our local Playstead Park. Joy planned and organized the day. Susan Fairchild recruited and organized the many volunteers. Joy was able to get a fabulously talented Native American drumming group, Winds of Change, a mixed group from many tribes. Neighbors came over to the park, drawn by the inviting heartbeat of their drums. Three Native American artists, Darrell Red Cloud and Dawn Arkinson Red

Cloud from Pine Ridge reservation in South Dakota and Lucy Dirksen from the Washington DC area, donated their time and talents to do the art and set up the tipi. The design featured six gorgeously drawn galloping horses, each with its own meaningful design: a sun, a moon, a dragonfly, a raincloud.  I really enjoyed helping an artistic host parent mix and pour paints in cups for everyone to use. There were two small tipis for children to paint as well. I painted a horse, bought a dream catcher and some beaded earrings, and danced in a large circle out in the field that day. Later that evening, I coaxed two of the Lakota youth and my son out of my hot tub to walk back to Playstead to see the tipi once again. They were leaving it up till the morning and Joy and some of the girls were planning to sleep in it. When we arrived, there was no one inside. The sun was setting, and gold light was hitting the running horses and deep blue sky painted above them. Several neighbors wandered over with their dogs, as nothing this interesting had ever been to Playstead park before. As I answered the neighbor’s questions, I couldn’t help but notice my three teens on their cell phones nearby. For two of them, a tipi wasn’t really anything unusual. For me, looking into the tipi door was glimpsing into a culture that I know very little about. As I peered

into the dark space of the tipi, I noted how the painted horses resembled a carousel, running around in a circle, with the tipi poles in between.

The Lakota YouthStay program is the brainchild of Joy Harris, a Medford resident and now retired Occupational Therapist. In response to the news of the depressed conditions and the completed suicides of many Lakota youth and young people at Pine Ridge reservation, Joy gave back. She and her husband, Bruce Roberts, a retired psychologist, spent pretty much the last 3 years organizing, emailing, fundraising, and traveling back and forth from Boston to the Pine Ridge reservation to get the program up and running. Joy and Bruce had a one week vacation after last year’s stay. They really needed it after all of their tireless efforts. This organization is a labor of love, which benefits all who participate.

I was originally asked to host last year, and did so with enthusiasm. My guest in 2017 was a mature 12 year old boy, who got along well with my own 12 year old. This year’s guest was no exception.

Preston was an ambassador of culture and liked to explain how his life was different or the same as ours, in each setting we found ourselves during the week. He said there were no tall buildings in Martin, South Dakota, and they have a Target and a strip mall in Rapid City, about a 2-hour drive away.  On the evening of the full moon, I drove around trying to get a better view for a picture. Preston commented that his home and his porch was better than Medford for that reason. There, he could watch the full moon rise with no buildings and no light pollution to obscure it.

The week was not without its frustrations. Each host family did their best to get the kids up, prepare something they were willing to eat, and get them ready for the day. We learned a bit about the Lakota Youth in advance from the numerous interactions and get togethers that Joy held over the year. Preston wrote us a letter, as did each child. However, I couldn’t really know how the experience of being so far away from home affected him. He had never been on a plane. He hadn’t been on a subway. He had never seen the ocean. In fact, there were some sad times during the week for some of the kids. They either didn’t get along with someone, were homesick, or felt an inner pang from a past trauma, cultural or otherwise. Despite the American teen image of the Lakota youth, I was keenly aware of the economic differences they were experiencing. I wonder how it all looked to them: backyard inground pools, manicured green lawns, hundreds of Dunkin Donuts shops. However, the youth and advisors are a group, and in a significant way. They are Lakota youth, and each held strong to that knowledge and belonging. It was unmistakable to me.

Thus, the Lakota Youth Stay was a true exchange program. Although I didn’t go to Pine Ridge, it came to me. I had the opportunity to briefly be immersed in the rich Lakota culture of polite manners, of dancing circles, of sharing, of humor, of trust, of respect for each other and of elders. As Preston drove off in the back seat of Bruce’s hatchback to Logan airport Wednesday morning, I hoped that what he gained at least approached the equivalent of that. 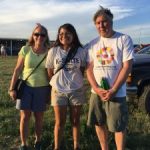 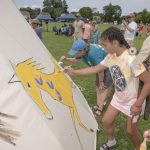